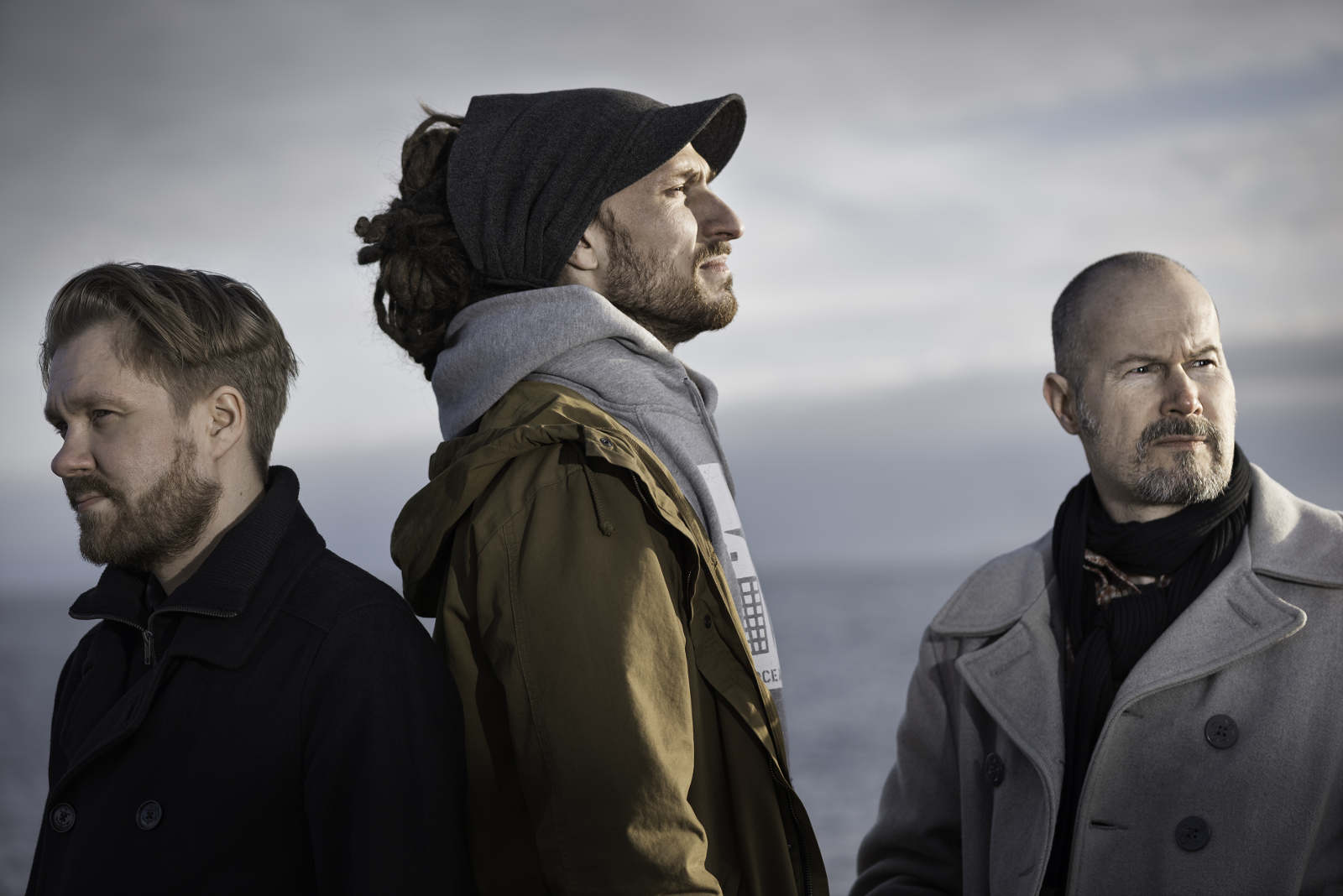 There's the astonishing RinneRadio, a hard-edged techno band led by a cool jazz sax player. That might look nightmarish on paper, but the reality is spiralling, mesmerising which induces dance-floor dementia in some and tranced-out tranquillity in others.

The offspring of reedsman/composer Tapani Rinne's brainstorming and composer/drummer Edward Vesala's encouraging, RinneRadio came into being in 1988 as three years of participation in the latter's groundbreaking Sound & Fury workshops in Helsinki encouraged Rinne to step to the fore as a bandleader.

The debut disc 'RinneRadio' consists of compositions by both Rinne and Vesala, and remains the most acoustic entry in the group's logs.

All in all, 1988 was a most important year in Finnish avantgarde jazz: Vesala was busily recording the future classic 'Lumi', and aside from Rinne, another Sound & Fury alumnus - guitarist/composer Raoul Björkenheim - made his first mark as a bandleader. His group was called Krakatau , and the debut album 'Ritual'. Rinne and Björkenheim shime not only on 'Lumi', but also as guests on each other's albums.

Named in the polemic style of such milestones as 'The Shape of Jazz to Come' or 'This Is Our Music', RinneRadio's sophomore effort came out in 1990 under the proud monicker of 'Dance and Visions'. These ten tracks laid the bedrock of the mèlange of jazz combined with various styles of electronica from ambient techno to drum & bass. 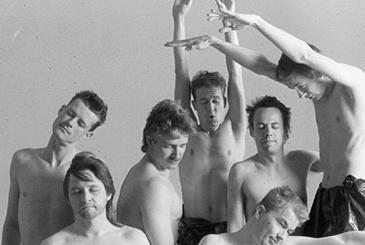 Rinne presented a 12-strong team of respected Finnish musicians, among the ranks of whom one could find local synth wizard Tommi Lindell and Sami yoiker Wimme Saari.

'Dance and Visions' also marked the beginning of the collaboration between Rinne and Jari Kokkonen, which continued to the very end of 2001 both in RinneRadio and in Wimme's group. All but one of the bold compositions are Rinne originals; the one being a collaborative effort between him and Wimme.

The RinneRadio camp was rocked by several earthquakes in 1992: Tapani founded Aani Records and pocketed the acclaimed Georgie Award (aka the trophy for "the Jazz Musician of the Year") as awarded by the Finnish Jazz Federation.

On the more musical side of things, 'Joik' was released. This disc is the first RinneRadio appearance of Kimmo Kajasto, the sample stylist who was to remain a most integral part of the team's sound until 1997. 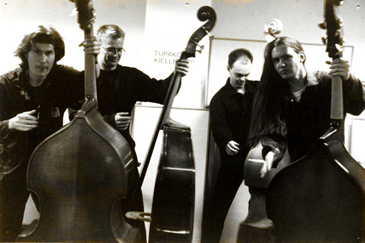 The next release, the cd EP 'DiorInNera', kickstarted a RinneRadio tradition of releasing original non-album material in another, more accessible, format.

RinneRadio's fourth full-length offering, 'Unik' was released in 1994. The group's underground following was growing at an almost exponential pace and its trance-like concerts were suddenly not-to-be-missed events for those involved in the techno and rave scenes.

A postmodern psychedelic venture, 'Unik' was received very favourably in the media and went on to be awarded with the Jazz-Emma (aka the Finnish equivalent of the Jazz Grammy).

Hot on the heels of RinneRadio's recent visits to countries such as Belgium , Spain and Estonia , they were now invited to perform in Sweden , Denmark , Germany , and Japan.

The next cd EP, 'Joulu', was a poignant reminder of the stylistic range of the group: These thoroughly Scandinavian readings of Christmas carol favourites proved that RinneRadio was once again ahead of its time in predicting the current trend of hymns interpreted with a jazzy overtone. 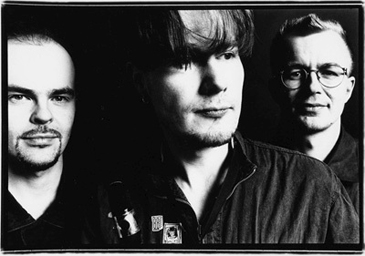 At the time of their fifth full-length offering 'RoK' (1996), Tapani Rinne, Jari Kokkonen and Kimmo Kajasto had invented a new musical style which would have its larger global impact a good ten years later. 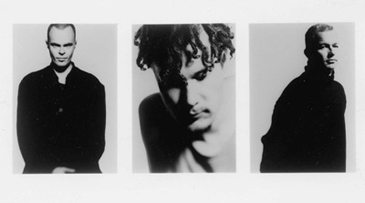 Whereas the laidback tones of acid jazz were all the rage on the Old Continent, RinneRadio brewed a delicious and dangerous cocktail mainly from jazz, hip hop and drum & bass.

Manifested in trailblazing pieces such as 'Aromaa Alt Too' and 'A Lot of Interference', RinneRadio had managed to carve a totally novel niche from Finnish jazz, Northern shamanism and various techno-related dance styles prevalent at the time especially in the UK.

1996 concerts at MIDEM in France combined with the groups first ever performances in the USA and Canada laid the bedrock for the upcoming international underground success.

The team's flirtations with the electronica scene were celebrated in 1997 in the form of 'pfft', an EP culled from a 1995 live session where Pan Sonic's inimitable Mika Vainio (aka Ø) interpreted a RinneRadio concert in real time according to his own minimalist sense of aesthetics: While the group performed a regular show in a regular concert hall, the members of the audience were able to walk into an adjoining room and experience the music as a simultaneous Vainio live remix.

By replacing sample wizard Kimmo Kajasto with a drum & bass DJ while beginning work on their sixth album, RinneRadio were once again willing to recalibrate the meters by which all innovative makers of music are measured.

In the manner of most techno events, the "warm-up" and "chill-out" sections mastered by such Finnish DJ's as Orkidea, Slow and Bunuel had been a part of the RinneRadio show for some five years already, but 'G' introduced DJ Ken-One (aka Jean Johansson) as a fully fledged member of the collective. 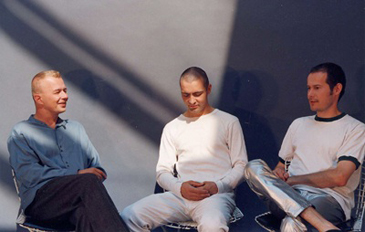 The album was also rewarded for its cover art by the prestigious "Vuoden huiput" ("The Best of the Year") –panel consisting of members of the Association of Professional Graphic Designers in Finland.

This 1998 release was the culmination of hard live work. New areas bombarded with the RinneRadio sound during 1997 and 1998 include Russia and Estonia.

An especially noteworthy event was the July 1997 show at the Knitting Factory. The music was sent live via ISDN cables to the Pori Jazz festival, where DJ Spooky interpreted the sounds in his own way to a Finnish audience.

On the release front, a separate mention must be given to the EP 'Osaka/Walk/Auto', whose title track is an absolute gem not available on any album. The other single release from ‘G' was ‘juju'.

RinneRadio decided to celebrate its ten years of existence in 1998 by commissioning a set of remixes from a variety of Finnish dance and rhythm music artists. Released in 1999, 'B' represents every album in the group's oeuvre and is packed with wild readings from the likes of Op:l Bastards, JS16 and Jori Hulkkonen.

For the live environment, the group underlined its visuality by constructing a special concert, during which they performed mostly improvised music as Luc Besson's film ‘Atlantis' was shown. The special guest for these shows was pianist/harpist Iro Haarla. Collaboratory concerts were also performed with The Nits and Edward Vesala. 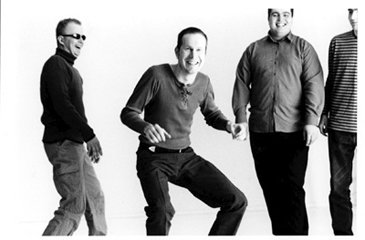 Utilizing outside producers (mainly Jori Hulkkonen and Veikka Erkola — of Brothomstates fame) for the first time in the group's history, RinneRadio shed its skin in 2001 with the lauded 'Nao', a multicoloured album which also managed to spend a few weeks in the Finnish Top 40. After ‘Nao' Tapani Rinne worked on the ‘Finndisc' project with Slowhill, a studio duo formed together with DJ Slow (Pepe Deluxé). The CD was released on EMI/BlueNote in 2002. Late in 2002 also Tapani's second solo album ‘Nectic' was released. 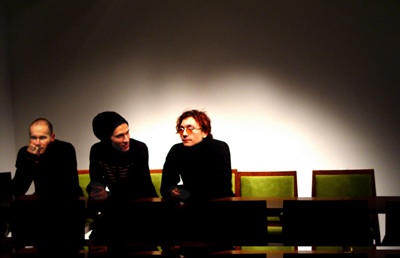 In March 2003 RinneRadio finally releases a new cd ‘Lumix'. RinneRadio's new video Airo wins the MTV3 Levyraati (THE Finnish Jukebox and Video Jury) on 28.9.2003 with record breaking 39 points out of 40! Only one of the jury members gave Airo a nine instead of full ten! Airo video was directed by P.V. Lehtinen.

In October ‘Lumix' gets a four star review in Dutch magazine Aloha (#7):

Hardly known in the Netherlands, but a very esteemed stage guest in other Western European countries is the Finnish band RinneRadio, founded in 1988 by sax player Tapani Rinne. Operating on the border of jazz and electronic music, the group built an impressive catalogue.

With their album ‘Rok' (1996) they were one of the predecessors of the lounge-sound and recently the group played with The Nits. In short, RinneRadio is one of the pillars of the interesting electronic jazz-scene in Scandinavia.

Their ninth album, after a stormy period finished in a new line-up, presents the more accessible as well as the experimental side of the group: from beat driven atmospheric tracks to etherical film music, displaying an unearthly, fairytale-like feeling thanks to Rinne's bass clarinet. `Lumix´ is a rich and timeless album, and RinneRadio deserves a place on North Sea Jazz.
Reviewer: Alfred Bos

In 2004 band releases album "Pan". It is made a bit different than the last records, more like a live-studio recording featuring some guests, i.e. Siiri Nordin, Teho Majamäki, Pekka Kuusisto.

On the new DualDisc album “+” the band explores new paths, taking the music towards experimental, even industrial sounds. Engineer Hiili Hiilesmaa, who is famous for his studio work with metal bands like HIM, is partly responsible for the more aggressive sound on tracks like “Krump”. RinneRadio's signature smooth nu-jazz grooves are still evident on tracks “Mel” and “Sella The Dog”. 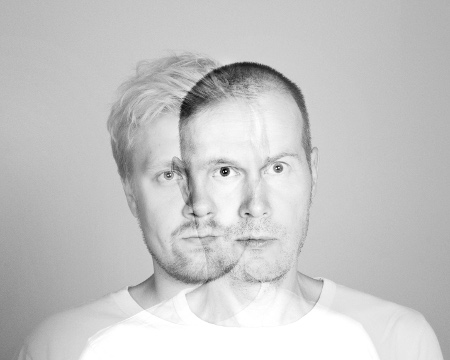 A limited first edition of “+” is released as DualDisc. The DVD side features 30 minutes of the band's 2004 outdoor show at Leigo Lake Festival as well as a bonus track, picture extras and tools & files for remixes.
RinneRadio “+” will be available in the UK on March 20 via Proper Distribution. In Finland album was released 8th of February, and in Germany , Austria and Switzerland album will be out late March. 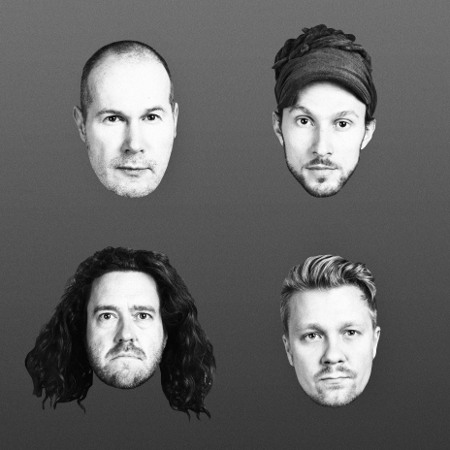